Skip to main content
⭐️ If you like OpenYurt, give it a star on GitHub! ⭐️
This is documentation for OpenYurt v1.0, which is no longer actively maintained.
For up-to-date documentation, see the latest version (v1.1).
Version: v1.0

On the one hand, YurtHub is an important component of OpenYurt，providing the additional abstraction, taking over the traffic from edge to cloud, and supporting the key abilities of Node Autonomy, Flow Closed Loop, and so on. On the other hand, lots of the cloud native scenarios are troubled by the resource limitation of the edge node, as the important component of OpenYurt, the performance of YurtHub in different situation play an influential role in the cluster of OpenYurt. Therefore, we need to obtain deeper understanding on the performance of YurtHub.

Master and WorkNode use the ECSs with different configurations, and the used cluster contains one master and other one hundred worknodes. All worknodes join the cluster by using the command yurtadm on edge mode.

Through Promethus collecting three types of indicators from the edge side in the OpenYurt cluster.

The overall test architecture is shown in the following figure 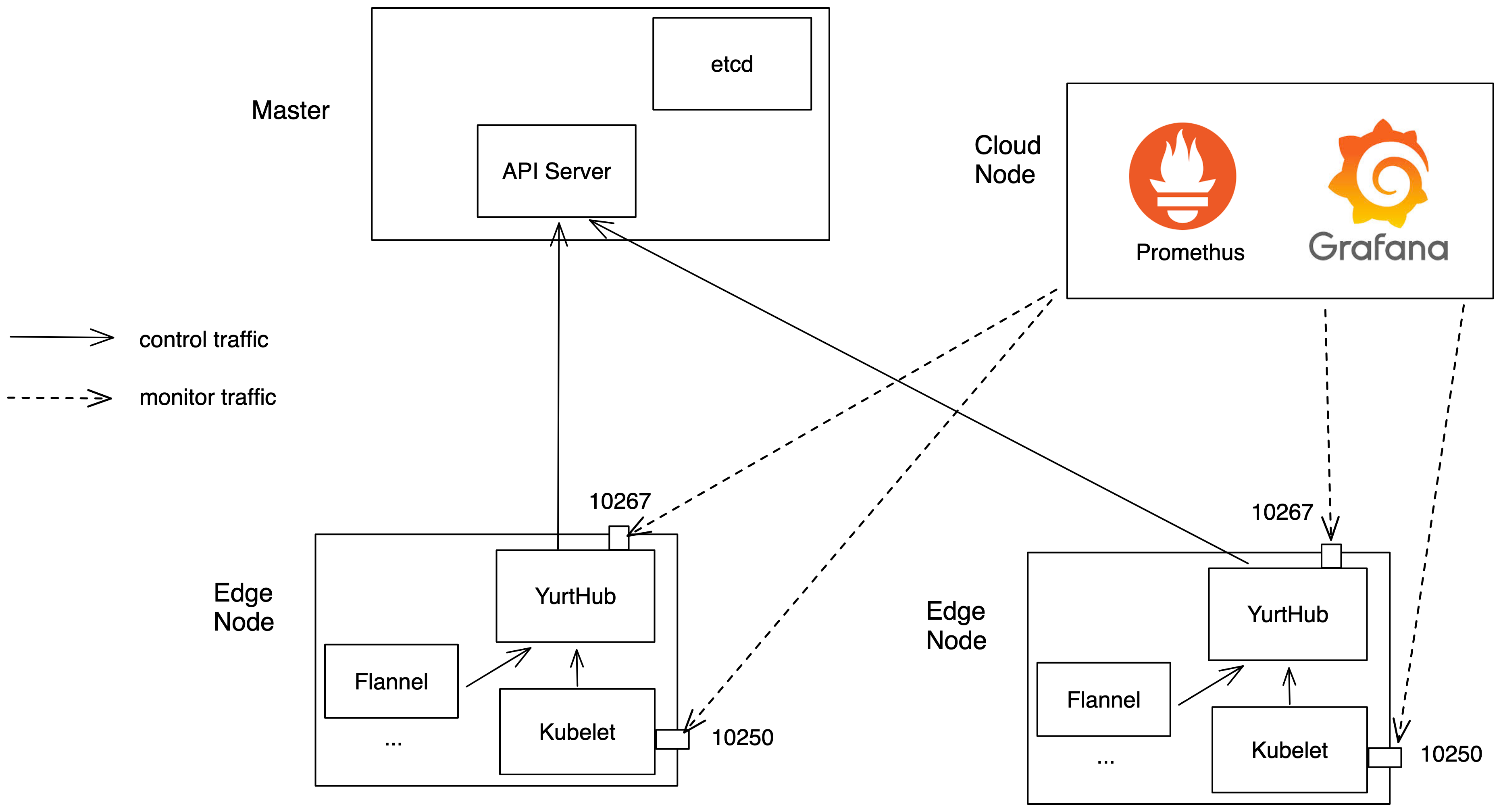 The above picture is the whole performance of request traffic of YurtHub in the scenario of 100 edge nodes, and the following features can be observed:

For further exploration of the source of traffic, we select one machine to analyze the traffic usage

The above figure shows the usage of traffic as workload deploying, we can get the rank of usage orderly when traffic mutating:

The peak of traffic of machine is approximately 320 KB/s, and those traffic contain mostly watch requests about service. The count of endpoint in service(per service 50 endpoints) may cause such situation. In normal case, the watch request about nodes also causes the variety of traffic of 5min period.

The above figure show the performance of traffic of machine in the process of uninstalling, total peak of traffic reach about 780k. Sorting by resource and action, the usage of traffic as the following data show:

The following figure show the situation of time spending mostly in the request per type as we see from verb:

In the initial state, before workload deploying, the memory occupation of YurtHub mostly ranges 35-40MB. Two machines use memory mostly, because the monitor suite of Prometheus deploy on those. The bottom line show the variety of YurtHub which is deployed on master by cloud mode. At 19:30 per node deployed 20 Pods, the memory of node improve about 2-5MB, and sustain such level. After workload is deleted, the memory reduce 10MB obviously, and recover to the previous level.

The occupation of single core CPU is similar to the usage of traffic, normally periodic wave sustains a low level(approximately 0.02%), two peaks of wave show at times of workload deploying（22%）and workload deleting（25%）.