Skip to main content
⭐️ If you like OpenYurt, give it a star on GitHub! ⭐️
This is documentation for OpenYurt v0.6.0, which is no longer actively maintained.
For up-to-date documentation, see the latest version (v0.7.0).
Version: v0.6.0

As a important component of OpenYurt, YurtHub provides additional capabilities for the edge-side components in the scenario of cloud-edge computing.

OpenYurt supports edge autonomy, which means even under the circumstance of network disconnection between cloud and edge, the workload containers at edge can run as they are when they restart, instead of being evicted and rescheduled.

YurtHub will cache resources at the edge side to ensure that kubelet and pods can get resources they need when the network between cloud and edge are disconnect.

In the native Kubernetes, the endpoints of a service are distributed among the whole cluster. But in OpenYurt we can divided nodes into nodepools, and manage them at the granularity of nodepool. On the base of it, we can also manage resources in each nodepool individually, such as using UnitedDeployment to manage pods in different nodepools.

In the native Kubernetes, Pods uses InClusterConfig to visit the Kube-APIServer by default. But in the scenario of cloud-edge computing, the cloud side and the edge side are often separated in different networks, thus pods cannot reach the Kube-APIServer through InClusterConfig. In addition, under the circumstance of disconnection between cloud and edge, the restart of pod will end in failure because it cannot get the resource from Kube-APIServer.

To solve the above two problems, YurtHub provides users a way to seamlessly migrate their pods to the edge side with no modification. For these pods which using InClusterConfig to visit the Kube-APIServer, YurtHub will automatically revise the Kubernetes addresses they use to redirect the traffic from Kube-APIServer to the YurtHub, without any modification of pod yaml configurations.

YurtHub can work well with multiple cloud apiservers to adapt different scenarios, such as the dedicated cloud scenario which often runs Kube-APIServer in HA mode, and the edge computing scenario which communicates through dedicated network and public network at the same time.

YurtHub serves as a client to redirect the requests to the APIServer and meanwhile it serves as a HTTP/HTTPS server to receive requests from kubelet and pods running on the node. In the aim of security, YurtHub manages the client certificate and the server certificate it needs.

YurtHub uses the capability of automatic certificate rotation of Kubernetes. Before certificates on the node expiring, it will automatically ask the cloud for new certificates. This mechanism, meanwhile, solves the following problem which will result in the failure when YurtHub restarts: YurtHub fails to rotate its certificates for the cloud-edge network breakdown, and fails again after the network recovering because of the expiration of certificates.

YurtHub can run on the cloud node and the edge node. Thus, it has two work mode: "edge" and "cloud".

The following figure shows the architecture of YurtHub working in "edge" mode. 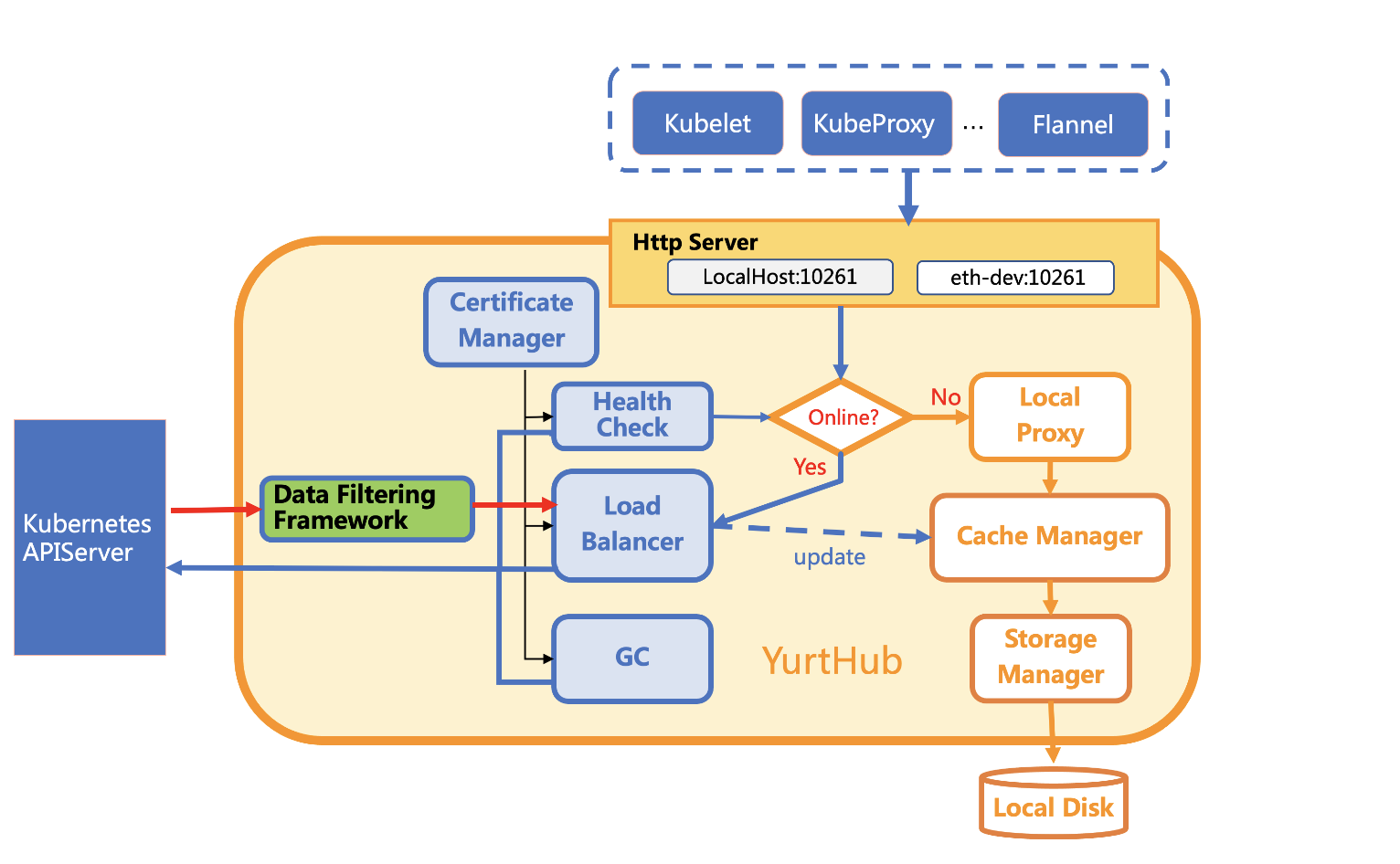 In this figure, the processing of requests is clearly shown.

The Cloud Request Processing Module is made of the following components:

The following figure shows the architecture of YurtHub working in "cloud" mode. 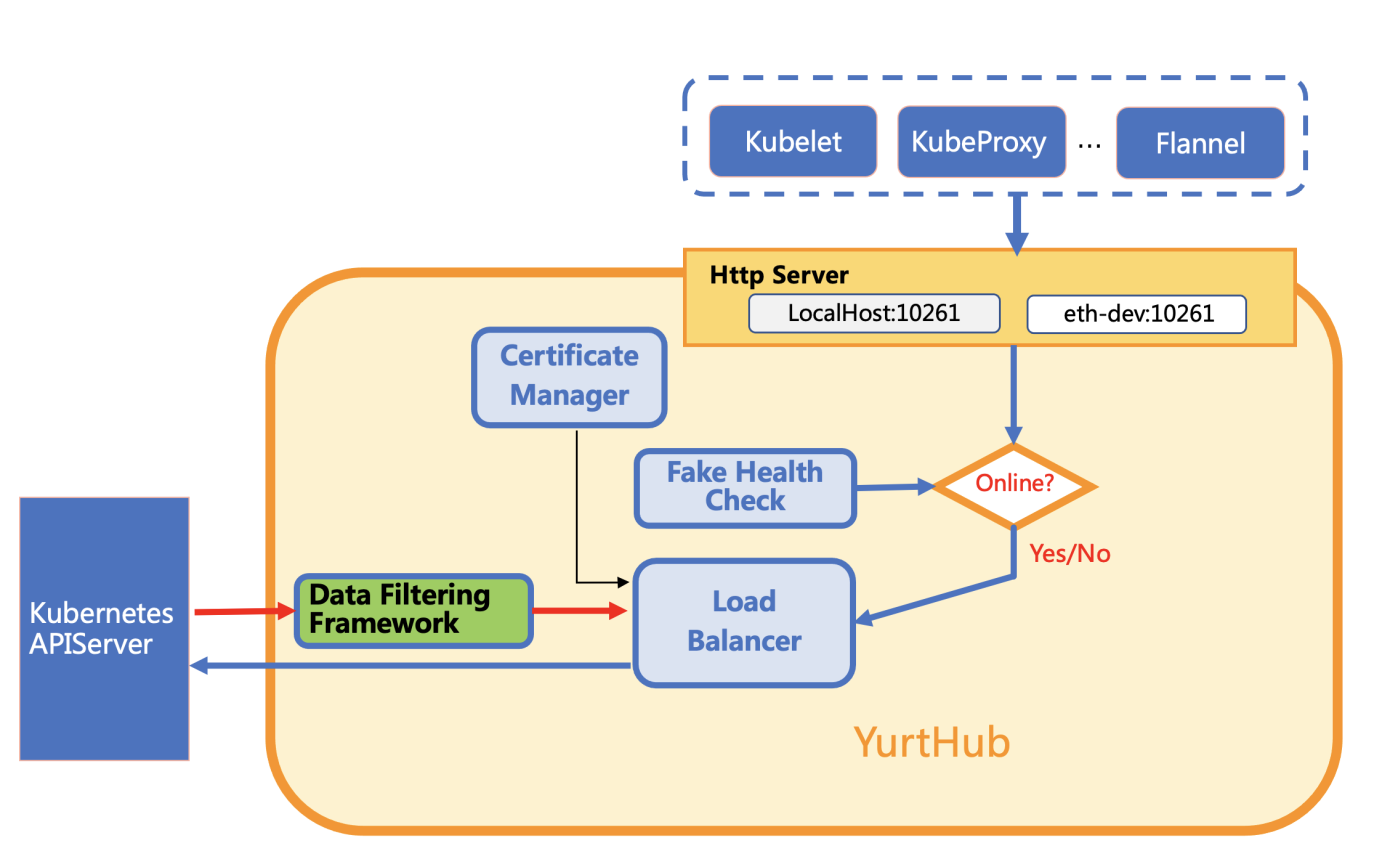 Compared with the "edge" mode, YurtHub runs in "cloud" mode will not check the healthy status of connection to Kube-APIServer because the network at the cloud side is stable enough. YurtHub will send all requests it received to Kube-APIServer and do not need to cache resources. Thus, it also disable modules relative to handling request locally.

Determine whether pods connect to kube-apiserver through YurtHub

The address of YurtHub Server. YurtHub Server listens on this address serving for requests of pprof, token, healthz and metrics. It works with the option --serve-port.

Set the mode of CertManager. Its value can only be "hubself", which means YurtHub will apply for certificates.

Its value is a list of disabled filters. All filters are enabled by default.

The path where to store cached resources.

The name of the virtual network interface.

If enable the virtual network interface.

If enable the management of iptables.

If enable the filter functions which will filter data in responses returned from the cloud.

The frequency of recycling cached resources.

The max times YurtHub will retry to update the heartbeat.

The number of consecutive times the Kube APIServer is detected as healthy before it is marked as healthy.

Additional organization names that will be added into the certificate of YurtHub. Multiple names should be separated by comma.

The token YurtHub will use to apply for certificates.

The path of CA cert that kubelet will use.

The path of client cert that kubelet will use.

The time YurtHub can tolerate the no response of Kubelet. After it, YurtHub will not update the heartbeat.

The mode Load Balancer will use. Its value can be "rr" which means Round-Robin, or "priority" which means it prefers to use address with high priority.

The max pending number of coming requests. If exceed this number, the request will be rejected.

The name of the node where the YurtHub is running.

The name of the nodepool where the YurtHub is running.

The HTTP port serves for proxy. HTTP requests sent to this port will be sent to Kube-APIServer.

The HTTPS port serves for proxy. HTTPS requests sent to this port will be sent to Kube-APIServer.

Path of files YurtHub will use.

The port YurtHub Server will listen on for HTTP requests. It should be used with option --bind-address.

Addresses of Kube-APIServer. Multiple addresses should be separated by comma.

Output the version of YurtHub.